WHAT IS A FRENCH DRAIN?

It is a well known scientific fact that water always flows downhill and by the easiest possible route! A slightly sloped trench filled with round gravel and perforated pipe used to divert underground water away from your house is the basic concept of a French drain. This is a common drainage system primarily used to prevent ground water from penetrating or damaging building foundations by providing an easy channel allowing water to flow.

The name – French Drain – has nothing to do with France! It was designed and promoted by Henry French, an American judge and farmer from Concord, Massachusetts in his book in 1859 promoting farm drainage. French´s drains were made with clay tiles, but nowadays, 4-inch diameter plastic pipes are used. If you live on a slope and have a persistently wet basement or soggy lawn, a French drain could be the solution.

Surface and subsurface water runs through the spaces between the round gravel and perforated pipe at the bottom of the trench which should be sloped. Water can then travel freely through the pipe, emptying a safe distance from the house.

A shallow French drain, or curtain drain, is useful if there is a problem with surface water—a soggy lawn for example, or a driveway that continually has water rushing across it. This type of drain need not be very deep, just sufficient to divert water.You may need a deep French drain if the shallow drain doesn´t keep water out of your basement. This is also called a footing drain and runs round the perimeter of the house at footing level. It is easy to install during house construction – but obviously difficult and more expensive to add later.

French drains depend on gravity, so a flat property may need to pipe collected water to a basin in the basement where a sump pump can lift it and send it to the storm drain system.You can also build an interior French drain if you can´t keep water out of your basement, to intercept the water where it comes in. Cut a channel around the perimeter of the basement floor, chip out the concrete and install perforated pipe all the way round. Solid pipe then carries the water to a collection tank sunk into the floor and a pump sends it out to the yard or storm drain.Incorporate a French drain behind the first course of stones or blocks if you are building a retaining wall on a hillside. Otherwise the wall could be undermined or even tipped by water moving down the hill or building up behind the wall. As clogging with silt must be avoided, drape landscape cloth across the base or footing and up the slope before adding the pipe and drain gravel. Nearing the top of the wall, fold the cloth over the top of the gravel and cover with several inches of soil. 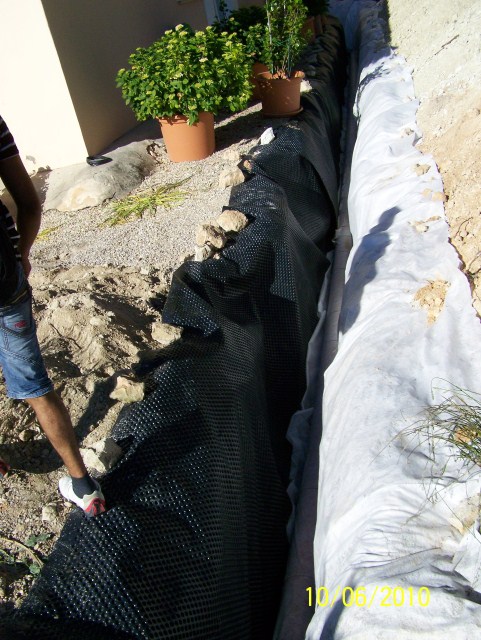